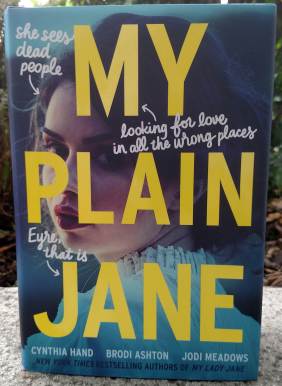 The publisher’s comment on the back flyleaf of this book says the three authors ((Brodi Ashton, Cynthia Hand, Jodi Meadows) have as their goal to “fix history by rewriting one sad story at a time.”  The book’s dedication partly reads “And for England (again).  We’re really sorry for what we’re about to do to your literature.”  Like with their first book LADY JANE, we know right away not to take anything in this book seriously but to sit back and enjoy the wacky journey through Bronte territory.

It is 1834 in Great Britain. William IV has cut funding for the Royal Society for the Relocation of Wayward Spirits that was established by Mad King George III, and the resulting political feud between him and Arthur Wellesley, the Duke of Wellington, sets into action a series of events drawing together the fictional characters of JANE EYRE (the Rochesters, Mr. Mason, Grace Pool, Helen Jones, Mr. Brocklehurst, etc.) and the real-life Bronte siblings (Charlotte, Emily, Anne, Branwell).  Ghost-hunting, feminism, espionage, class conflicts, deprivation of the poor, romantic ideals, political jockeying for power–there’s no topic that escapes examination and wry comment.  There is even a sly nod toward Algernon Blackwood, British ghost story writer (considered one of the best of the genre), and a funny reference to the size of a certain inauguration crowd.

Readers familiar with the original work by Charlotte Bronte will laugh at the modernized take on life in Britain in the nineteenth century and delight in the asides made by Charlotte, Jane and others as they chronicle the events taking place in alternating chapters.  The narrative is fast-paced, clearly written, vastly enjoyable, and totally free of anything objectionable.