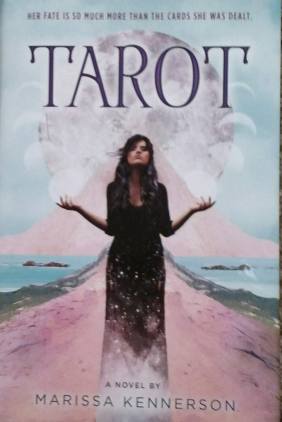 Anna is a 16-year-old who is the product of an adulterous affair between her magician father and married-to-someone-else mother. She lives in what sounds like a traditional fairytale kingdom, where she has been locked away in a tower all her life—in part because her mother’s husband, the King, fears she may have inherited magical powers she will use against him or his kingdom. She has few visitors and spends her time weaving elaborate wall tapestries. She expects the King to release her on her 16th birthday, but instead he decides to have her executed. With the assistance of three courtiers she escapes and falls down a metaphorical rabbit hole, ending up in the magical kingdom of Cups.

Here everyone is young, beautiful and untroubled, much like the TV show “Bachelor in Paradise.” They introduce her to coffee! The girls are excited about make-up and clothes and hairdos! They have parties and raves on the beach! Even the guys are artists and sensitive dudes! Everybody welcomes her and falls in love with her–she, who has never interacted much with anyone, let alone people her own age. As a matter of fact, Cups and the people in it turn out to be the fleshly incarnation of one of the imaginary kingdoms she wove into one of her tapestries.

She says she fears the King and his armies will come after her to either drag her back or kill her, destroying Cups in the process. Despite saying this a time or two, she doesn’t seem to live in fear of it but instead gets on with her playtime. The people in Cups, who (except for one person) never go anywhere, accept the flimsiest of excuses as to how she got there, and they don’t seem to feel the need to quiz her more closely. When finally events lead them to discover who she is and the threat she brings to them, she must struggle with the sense of betrayal they feel.

In the meantime, on the other side of the galaxy, the King manages to find a way to her, and, yes indeed, brings his armies to destroy her and the Cups community. She creates a magical army of her own that represents the Major Arcana in the Tarot. Although the King slices her throat and kills her, lo and behold, magical things happen and she is resurrected.  The bad guys are sent back in the other direction through the rabbit hole, where it appears good changes may be effected in the King’s territory after all.

In this book there is a little mild cussing (variations of damn, and maybe one hell). There is one homosexual relationship. There is romance but no sex to speak of, although one unmarried couple sleeps together. There is violence of the battle variety. The underlying theme of the Tarot is occult.

I wish I knew how this book made it past an editor or publishing house. The author flips from stereotypical (archetypal?)  fairytale images and speech to modern talk and sensibilities, with even the inhabitants of the old kingdom using modern vernacular. Hey! Pick a style and stick with it, at least within a kingdom. There is no real tension in the story. At the end, the magical Tarot army appears and fights a sort of battle, but it is a little too late in the scheme of plot development.  Anna does not make a very credible heroine.

There might be a good original idea in this plot, but it is not developed deeply or well.