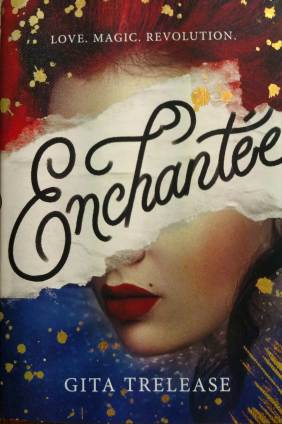 On the eve of the French Revolution in 1789, seventeen-year-old Camille Durbonne finds herself living in a garret with her fifteen-year-old sister Sophie and older brother Alain, so desperately poor that she turns to the magic taught her by her mother to turn bits of discarded metal into coins in order to buy food and pay rent.  Coming from a respectable life–her father owned a successful printing business until word spread about his anti-royalist sentiments–the Durbonne children struggle to stay off the streets since both parents died of smallpox three months past. That is, Camille and Sophie do. Alain abandons his career as a soldier to spend his time drinking and gambling. Shady characters show up at their apartment looking for payment, their landlady cautions them about his behavior, and Camille must deal with his thievery and violence towards her when she refuses to give him any more money.

Finally, when Alain speaks of his most threatening debt collector showing up to press her and Sophie into working the streets, she clearly sees what she must do, which is turn to the stronger “la magie” that was used by her mother to disguise herself as she moved around the city spending the “turned” coins to pay for family necessities. This darker, more dangerous and damaging form of magic works for Camille as well, and she is able to transform herself into a widowed baroness to present herself at Versailles and participate in lucrative gaming activities to raise cash.

Camille’s double life is further complicated by her making (as her normal self) the acquaintance of a trio of aeronauts whom she rescues by grabbing the rope of their runaway balloon as they are floating away in the park.  They befriend her, invite her to their workshop, and involve her in their project.  One becomes romantically smitten with her, as does she, him.

This is a lengthy, well-crafted and exquisitely written book that explores so many important themes: class division, independence of journalistic thought and expression, the perils of addiction, the dangers of duplicity, the causes of political upheaval, the unrelenting suffering of the poor and so on. (Victor Hugo would approve!)  Content to flag includes a “damn” here or there, a gay partnership, some violence, and references to prostitution. It grieves me to report that the editorial proofreaders missed some grammatical errors on a couple of pages (17 and 103, for example); otherwise I would pronounce this book perfect in every way.

Buy this one for sure for your library.