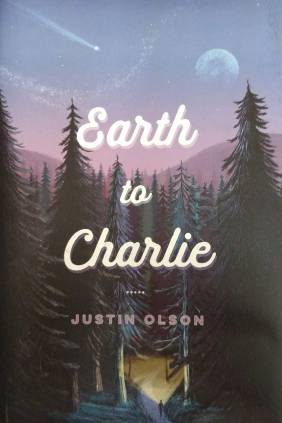 Charlie is a sweet kid finishing up his freshman year in high school.  His mother left long ago, telling him the aliens were coming to get her but that they would return later for him.  His dad has turned into an uncommunicative alcoholic who is seldom home.

At school the story about Charlie’s mom has gone public (the family lives in a very small town in Montana, so of course it would) and this, combined with his last name (Dickens), has made him the butt of jokes and the target of bullies.  It’s a pretty miserable life, but Charlie keeps his head down and keeps plugging along, not having a lot of other options.

At night he scans the skies looking for UFOs, hoping his mom and her other-worldly friends are on their way to rescue him.  He has one other relative living nearby, his paternal grandmother, but she is locked in a world of dementia.  He nevertheless faithfully and frequently goes to see her, and he tries both to better her life and to make sure she knows she is not forgotten.  He has happy memories of her.  He has a next-door neighbor, a website designer who has grown so fat he cannot leave his house.  Charlie visits regularly and walks the man’s dog daily.  Charlie also has a part-time job working at a diner.  He has an unrequited crush on a lovely girl at school.  So, while he is bullied and has no friends his own age, Charlie still is involved in loving ways with man and beast, and he is not a lazy kid.

A new classmate, Seth, moves to town in the last few weeks of school.  He seems to have it all together but takes a surprising interest in Charlie and cultivates a friendship with him.  Charlie is thrilled to have a buddy to hang with, although there are things that Seth does that he finds unsettling in small ways.  Eventually it turns out that Seth is gay and attracted to Charlie, but this doesn’t seem to explain why Charlie sometimes feels like his boundaries are being breached and that Seth may be betraying him in some way.  To me, this is not satisfactorily addressed in the novel. Instead of heeding his discomfort, Charlie, after initial protests, allows Seth to overrule his objections and lets the moments  pass–he is just so grateful to finally have a friend.  Young adults (everyone!) need to learn to listen to their feelings and not let themselves be overruled at such times.  Charlie himself is not gay (though Seth’s attention makes him question why Seth thought he might be), but they remain good friends nevertheless.  Seth is helpful through his companionship and observations in aiding Charlie to become better grounded in the here-and-now so that he can move forward in life.

Near the end of the book it turns out that Charlie’s mother is actually schizophrenic and still alive, living with her mother several states away.  Charlie’s father has had her contact information all along.  Sure would have been a better service to his son to share that much earlier instead of letting the boy wonder why he’d been abandoned.  Through the last third or less of the book the father turns from being harsh and neglectful to more warm and fuzzy, with no discernible motivation for the change.

Oh well.  The book has a lot of coarse language, including at least one instance of religious profanity and an F-bomb.  Mainly you hear a lot of “dick,” “ass” in many different varieties, and “damn.”  The book does not take any moral stands aside from kindness and love, that I can detect.  I would not spend scarce library dollars on this one.