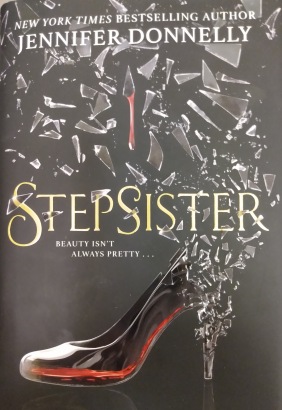 This novel is a recast of the Cinderella story, opening with the two ugly stepsisters (in this book, Isabelle & Octavia) cutting off part of their feet in order to fit the glass slipper being shopped around by the Prince.  No, we all know that doesn’t work, and Ella the kitchen maid is discovered by the Prince and goes off with him, eventually to become the Queen of France.

Hard times fall on Ella’s stepfamily. Her stepmother eventually wigs out and starts addressing cabbages as noblemen. Isabelle and Octavia are subject to terrible harassment from villagers when their mistreatment of Ella becomes known. The family home is burned down during ugly mob action. Things become very bad for the people who mistreated Ella when they thought she was a nobody.

Isabelle is the protagonist of this retelling. She has a great love and capacity for adventure and derring-do which has been frustrated by her mother’s efforts to turn her into an acceptable, marriageable female. Her life options grow narrower and narrower, partly because of her lack of physical attractiveness and partly by her obstinacy against making herself over to fit what society expects of her as a woman.

Fate, in the form of an old crone, draws a map charting out the sad course Isabelle’s life will take. Chance, a handsome, rascally guy, steals it, with the idea of helping Isabelle change her future. Fate and Chance wager on which of them will be successful, and both venture into Isabelle’s neighborhood to help their causes along.

Other characters appear in the form of a love interest for Isabelle, a lumpy but lovelorn (though not for the stepsisters) young neighbor, a miserly and grouchy landlady, bullying townspeople, a fairy queen, and military leaders.

Through a number of dramatic events and help from others, Isabelle learns to reclaim, understand, and put into action her true self, to the betterment of all good people around her.

This book has a bit of gruesomeness, war violence, sexual threat, and witchery. Some of the plot devices are quite clever. Although presumably set in fairytale time, there are many anachronistic references and attitudes that just plainly do not fit. There are a very few instances of coarse language.

I found this to be a preachy, irritating book in which the characters are made to reflect certain values and attitudes but never come to life.  I wouldn’t recommend this book to anyone, but it is not an offensive book.