Home › Bullying › The Shadows Between Us

The Shadows Between Us 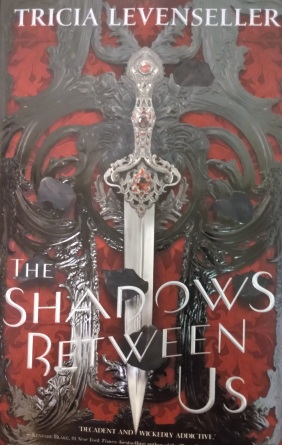 Alessandra is the second daughter of a baron in need of a big infusion of wealth to pay off debts and sustain his estates. Her older sister Chrysantha is their father’s favorite. Actually, she seems to be just about everybody’s favorite, primarily due to her beauty. The kingdom in which they live is ruled by the Shadow King, a hunky, very mysterious young man who is on the hunt for a wife at the behest of his state council, who want him to produce an heir. Eligible young women in the kingdom hasten to the palace to be paraded before him, but all are summarily dismissed, including the beautiful Chrysantha. [This book has echoes of several famous stories, including Cinderella, Robin Hood, and the Twilight series.]

Since Chrysantha strikes out, her father betrothes her to some other royal, leaving Second Daughter as his only remaining card to play in the hunt for wealth.  Alessandra is 18 and a pretty tough cookie. At the age of 15 she fell hard for a visitor to her father’s estate, giving herself heart, body and soul to her first and very persuasive lover, Hektor.  (I believe his seduction of her in our day and age would qualify as child abuse.)  Hektor has enough of the dalliance finally and dumps her unceremoniously. Emotionally destroyed, Alessandra responds by murdering Hektor and then setting off to do exactly what he did–seducing, bedding, and then leaving innumerable lovers, though with the added feature of first finding out compromising information about each which she can use to wield power over them and enrich herself. After years of practicing this behavior, she sets her sights on the ultimate ambition of meeting and marrying the Shadow King, killing him off, and becoming sole ruler of the kingdom.

She bullies her dad into escorting her to the Shadow King’s palace to make herself known.  A savvy girl at manipulating people and situations, sure enough she parlays her attractions right into the SK’s eyesight and then household.  Turns out, after getting to know her, he persuades her to enter into a sham relationship with him to get his courtiers off his back about marriage, in exchange for enabling her to attain recognition and power.  As you ought to guess, these two fall in love and, after a very rocky progression, wind up together in the end.

Along the way there is magic, intrigue, violence, friendship, love, romance, betrayal, advice to the lovelorn, blackmail, details about costuming, some yummy food descriptions, etc.  The author develops a sufficiently complicated plot and moves things along in an interesting manner.  Readers will want to stick with it till the end to find out just what’s what.  There are a few odd anachronisms here and there that do not ring true, but oh well.  Characters are reasonably fleshed out and interesting.

There is a lot of sexual talk, although descriptions of sexual activity are more suggestive than explicit.  The author presents homosexual relationships as routine and acceptable.  There is some profanity.  A major theme of the book is female sexual empowerment.  Miley Cyrus would approve.

Depending on what values you want to instill or encourage in young adult readers, this book may or may not be suitable.